The last time I fished with my friend Peter on the Lake Fork, I broke off a huge fish because I forgot to retie my flies after a fish tangled me in some rocks.  The fish that got away haunted my dreams, but today was a chance for revenge.  Peter, Mitchell, Kyle, and I were fishing the stretch where I broke off the monster the time before, and I stopped fishing about 30 minutes early just to double and triple check my flies and line and think through how I would cast to and play the monster this time.  I wasn't going to miss another chance to catch this fish.

When we got to the spot, sure enough there was a monster rainbow hanging out in the eddy along the cliff, just like the time before.  After some discussion about the best approach to cast to this monster without spooking him, I put a cast along the cliff wall and watched my flies swirl into the eddy.  "Set!" Peter yelled.  The monster rainbow had taken my nymph and the fight was on.  A few minutes later, Mitchell scooped up the bow in his net before he could take off on another powerful run. I was shaking from excitement.  There would be no more nightmares about this fish--I had exacted my revenge! 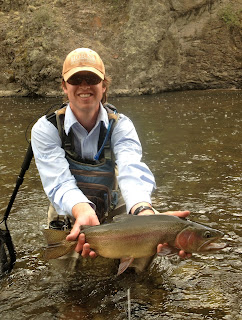 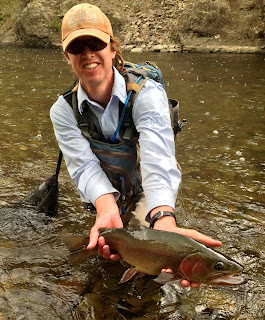 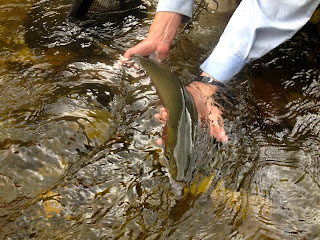 We landed some more good fish over the course of the day, and at one point Kyle, Peter, Mitchell, and I all had a fish on at the same time--talk about a productive day! 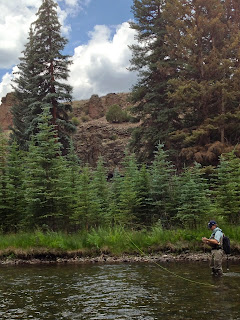 Peter wrote an article on Fly Dreamers about my revenge fish: Revenge Fish Article.  Check it out.