Laying Down the Law

Many of you have asked what possessed me to quit my job and move to the mountains.  Hopefully the story below (which I wrote for a friend's website that is just getting started) makes it a little more clear.  I don't know how long I will work as a fly fishing guide and ski instructor or if I will work full time as a lawyer again soon, but I am enjoying every minute of this adventure while it lasts!

Staring out my office window at the buildings of downtown Dallas lit up for the night, a wave of panic rolled over me.

Have I made a terrible mistake?  Am I really going to leave everything behind?

I looked back at the floor covered by the boxes of legal notes and files I had been reviewing, hoping that would somehow ground my flight of panic, when someone knocked on my door: “Heard you quit to go fly fishing.”

“Well, that’s the gist of it anyway,” I laughed, a little more settled now.  “The plan, if you can call it that, is to leave the law firm and my life as a corporate lawyer behind—at least for a while—and go fly fishing, hiking, and skiing through the Rockies.  If I can get things wrapped up here in the next few days, I can still make the closing weekend of the ski season at A-Basin.  After that, I’ll fish my way down, south and west, to my home base for the summer: Lake City, Colorado.”

“You know we all hate you, right?”

A week later, I was driving north on I-25 toward the mountains.  I had moved out of my office and my apartment, my law books boxed up and thrown into storage with the rest of my former life.  The long drive gave me time—and forced me—to process what I was doing, where I was going, and what I was leaving behind.  I had been a corporate and securities attorney at a mid-size law firm for nearly six years.  And I enjoyed it for several years, despite the late nights, long weekends, and incessant out-of-the-blue fire drills.  There was a feeling of accomplishment when we helped a client close a big deal—and a sense that the long hours we put in on the project were worth it.  And there was so much to learn—each day brought new challenges, new problems to solve.

But somewhere along the line it stopped being rewarding.  As I progressed from a junior associate to senior associate sitting first chair (or only chair) on deals, the work piled up.  The late nights and all-nighters piled up.  The long weekends at the office piled up.  Meanwhile, opportunities to see friends and family and spend time skiing or fly fishing dried up.  The security guards at the office all knew me by name.  As did the employees at the take-out restaurant across the street.  After several years of grinding out the hours, I realized I didn’t have the energy to do it anymore—I was completely burned out.  Projects that used to take me an hour now took two because I couldn’t stay focused.  I’d stop reviewing a document to look up a question of law, but I’d soon find myself looking at sports scores on ESPN, snow depths across the Rockies, or, more likely, pictures of giant fish—I guess because I just didn’t want to do the work anymore.  But that wasted time (which I had to write off) just meant I was at the office later than I otherwise would have been, so the next day I would be more exhausted and frustrated—and even more inefficient.  It was a downward burnout spiral, and I knew I had to get out.

I wasn’t ready to shut the door on corporate law forever, but I knew that before I could give it another try, I would have to recharge my batteries.  So I hatched a plan—head to the mountains and go fly fishing (with a little hiking, mountain biking, rafting, and skiing mixed in for good measure).  Basically, go take my dream trip.

I started fly fishing and skiing in elementary school, and I immediately fell in love with both sports.  My family went to Durango, Colorado to visit relatives a couple of times each year.  During the winter we would head to the slopes, and I would squeeze as many runs in as I possibly could, always racing to make the last chair up the mountain each day.

During the summer we would head out to remote mountain streams around the area to catch small but aggressive trout.  I had always liked fishing, but fly fishing—especially in these little mountain streams—was so much more active, so much prettier, and so much more relaxing.  Instead of melting on a humid afternoon tromping through tall, snake-infested grass around a muddy Texas stock pond, I was hiking up a crystal-clear creek, its cold water counterbalancing the warm summer sun as the water gurgled rhythmically by.  And the fishing itself was addicting: in these small creeks, if you got a good drift through a good spot, you caught a fish.  I was hooked.

As I got older, I started seeking out bigger water—and bigger fish.   I made it to the Snake and Green Rivers outside of Jackson Hole, I fished Silver Creek near Sun Valley, I tried the White River in Arkansas, but I continually gravitated back to the San Juan River near Durango to hone my technique.  The summer between graduating from college and starting law school, I worked in Durango and logged even more time on the river.  When I graduated from law school, I took off for Alaska in search of monsters on the fly.  And when my little brother followed my footsteps and graduated from law school as well, we celebrated by racking up more debt and flying halfway around the world to fly fish Kamchatka.   So when I announced my plan to leave my life in Dallas behind to fly fish, my friends and family weren’t really surprised.

By the end of that summer of freedom, I had fallen into a job as a fly fishing guide at Dan’s Fly Shop in Lake City, Colorado.  I was getting paid to take people fishing and teach them the sport I love in one of the most beautiful places I had ever seen.  After getting a taste of this, there was no way I was going to be chained back down to a desk again any time soon.  So I started looking for winter jobs in ski towns.

When I was in elementary school, I told every adult who asked that when I grew up, I was going to be a fly fishing guide in the summer and a ski instructor in the winter.  Elementary-School Ryan seemed to be right about the fly fishing gig, so I figured I should follow through on that life-long dream and try my hand as a ski instructor too.

Well, it turns out I had been right about that as well.  This spring I wrapped up my second year as a ski instructor at Deer Valley in Utah, and I am planning on going back next season after I finish my third summer as a fly fishing guide in Lake City.

Depending on the season, I spend each day either fly fishing, skiing, or trekking to beautiful vistas to take pictures (I sell some of my photographs in Lake City), and while my alarm clock used to jar me awake from anxious dreams about impossible deadlines and legal issues, filling me with a sense of dread, I now wake up most mornings before my alarm excited to spend my day doing something I truly love.  The frantic bustle of the corporate world—and the incessant noise of ringing phones, chiming calendar reminders, and buzzing email alerts—has been replaced with wilderness, tranquility, and simplicity.


What started as a short sabbatical from my life as a lawyer has become a chance at a new life—a life chasing big fish and deep snow—the dream life I envisioned as a naive elementary-school kid clumsily slinging around his first fly rod in the shadows of the mountains. Looking out my window at snow-covered peaks, I can see it clearly now: leaving it all behind was no mistake. 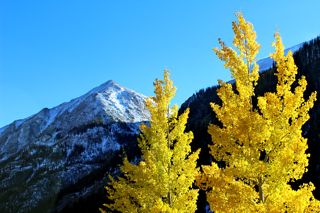