Beaten by Big Fish on the Lake Fork

I did some fishing with my friend Peter, who has started Devils Creek Outfitters, and we got into some big fish.  Unfortunately, all my big fish got away.  We were fishing a stretch of the Lake Fork that has great deep holes cut into the cliffs along the river, and at one of these holes we spotted a huge rainbow, and I immediately cast to him.  Well, the monster rainbow turned for my fly, ate it, and I set the hook. Snap!  The line broke immediately.  I was devastated and confused as I could only watch the fish try to shake my fly free.

In the excitement of seeing the monster rainbow, I had completely forgotten that I had just extracted my fly from some rocks after a fish had managed to get me hung up.  Not only had I been hung on the rocks, but the fish was still on the line, diligently sawing through my leader until he eventually came off.  I couldn't believe that I had been so careless and had missed a great chance at a huge fish.

I had several other big fish (over 20 inches) later that afternoon, but I couldn't get them to the net either. Overall, it was an exciting day even if it was marred by "the one that got away" several times over. 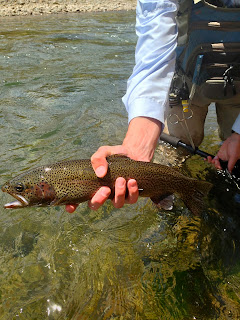 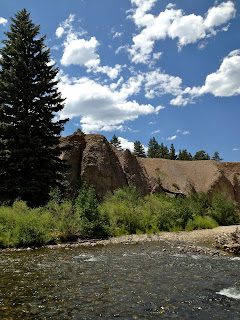